WHY YOU SHOULD COMBINE TURMERIC AND BLACK PEPPER? 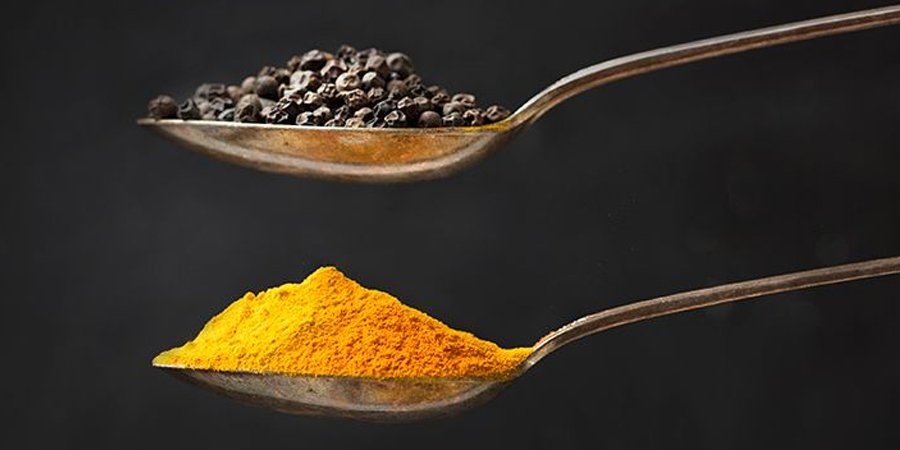 Known for its vibrant colour and delightful, earthy flavour, turmeric contains curcumin, which is revered as a powerful anti-inflammatory compound.

This bright yellow spice is commonly used in Indian cuisine, turmeric is one of the most powerful herbs in the world. With its myriads of healing properties and health benefits, this spice is one you should seriously consider adding to your cooking repertoire if you haven’t already done so.

According to MedIndia.net, turmeric is “five to eight times stronger than vitamin E and stronger than vitamin C, this antioxidant breakthrough may help boost your immunity, maintain normal cholesterol levels, and puts the brakes on ageing.” WebMD has a long list of benefits for you to probe through. Here’s another 22 surprising uses for turmeric from Gamma Nutrition.

WHAT ARE THE ACTIVE INGREDIENTS?

Known by the scientific name Curcuma longa, this spice comes from a rhizome belonging to the same family as ginger. Native to the Indian subcontinent and parts of Southeast Asia, turmeric has been used in Ayurvedic medicine for thousands of years. The spice was first used as a dye, and eventually came to play an important culinary role, known for its warm and peppery flavour, bright orange-yellow colour, and mustard-like aroma.

The primary active ingredient in this yellow spice is curcumin, an antioxidant and natural anti-inflammatory. In addition to giving the spice its characteristic golden hue, curcumin is responsible for most of the health benefits this spice has to offer. Not only does this spice offer protection against free-radical damage and chronic inflammation, but it offers antidepressant, anticoagulant, analgesic, and anti-arthritic benefits as well.

The Health Benefits of Turmeric

Used for thousands of years in Ayurveda, the Traditional Indian Medicine, this golden spice has many proven health benefits.

Here is a quick overview of the top eight health benefits of turmeric:

Though temporary inflammation is beneficial in protecting the body against pathogens and in stimulating the healing process, chronic inflammation has been linked to many diseases such as heart disease, cancer, and Alzheimer’s. The anti-inflammatory benefits of curcumin have been proven just as powerful as the top anti-inflammatory drugs in fighting inflammation at a molecular level.

The common link among many age-related and chronic diseases is oxidative damage. The antioxidant mechanisms of curcumin actually neutralise harmful free radicals while boosting the body’s antioxidant capacity to create a double-edged sword in the fight against disease and ageing.

The anti-oxidant properties of this yellow spice help to slow the process of ageing and may also prevent chronic diseases such as Alzheimer’s, metabolic disorder, cardiovascular disease, and diabetes. By preventing or slowing the progression of these diseases, curcumin may increase longevity as well.

By reducing cholesterol, improving blood pressure, and fighting inflammation, turmeric helps to reduce the risk for heart disease. It has also been shown to improve endothelial function as well as blood clotting for overall heart health.

Turmeric has long used to quell bellies that aren’t behaving properly. A 2013 study showed that taking 500 mg of turmeric a few times a day can treat an upset stomach.

Though it may not be a cure, turmeric and its active ingredient curcumin have shown potential in preventing and improving the treatment of cancer. The antioxidant benefits of this spice have been shown to reduce cancer tumour growth.

The powerful anti-inflammatory benefits of curcumin have been shown to relieve pain and swelling for numerous forms of arthritis. In one study, 65 patients with rheumatoid arthritis were given curcumin supplements or Diclofenac sodium, a common arthritis medication. The results revealed that the curcumin group experienced the highest percentage of improvement.

According to early experimental research at the Medical University Graz in Austria, the curcumin in turmeric may delay liver damage that can eventually lead to cirrhosis.

Numerous research studies have shown this spice to offer antidepressant benefits similar to those offered by popular medications like Prozac. In one particular study, 45 patients with depression took fluoxetine (Prozac), curcumin supplements, and placebo. The results of the study revealed that curcumin was just as effective as Prozac in managing depression and alleviating symptoms.

Kansas State University researchers discovered that adding turmeric to meat can reduce the levels of heterocyclic amines (HCAs) by up to 40 percent. HCAs form on chicken and meat when cooked over high heat, like in grilling. Consumption of HCAs is linked to higher rates of cancer.

Turmeric is one of the healthiest spices used in Indian cooking. The active compound curcumin is considered anti-inflammatory and an anti-oxidant. The spice has been popular in Indian medicine such as Ayurveda for centuries.