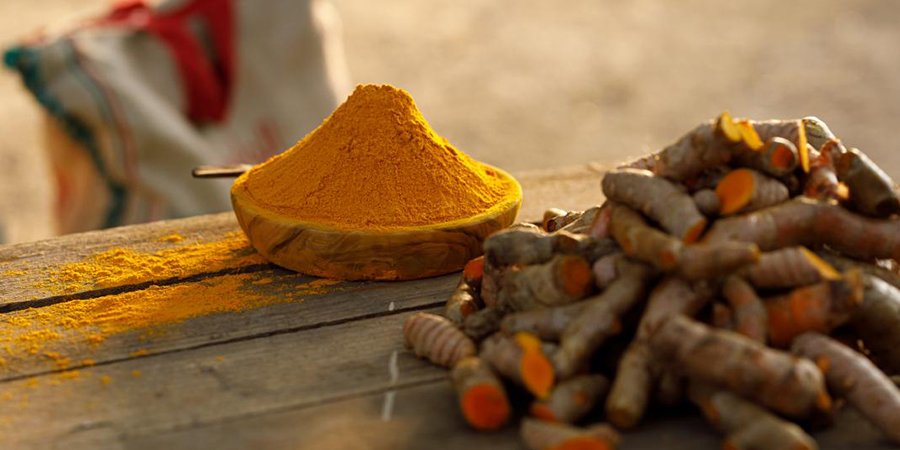 Curcumin, a polyphenol, is the principal active component of turmeric. Although this only accounts for about 3% of the spice composition. Research has shown that curcumin, typically in high doses, may have anti-inflammatory and antioxidant properties, and suggests it has some potential to inhibit the development of several types of cancer cells.

Extracts from the spice turmeric can kill off cancer cells, according to BBC News. New research from the Cork Cancer Research Centre shows that the extract can destroy oesophagus cancer cells in a lab.

Oesophageal cancer cells are often resistant to cell death (the aim of chemotherapy), so in this laboratory study the researchers investigated the effects of curcumin (the active ingredient in turmeric) on a range of different types of cancer cells from the gullet. Introducing the chemical induced a type of cell death, called mitotic catastrophe.

While it is too soon to call this a cure for cancer, the findings pave the way for further investigations into the potential of plant-derived substances that are able to induce cell death in cancer cells. This could be particularly important for treating cancers that have so far proved resistant to chemotherapy.

The study found that cancer cells substantially lost their viability after being incubated with curcumin for 24 hours. This action was clearly dose-dependent, meaning higher doses had a greater effect on the viability of the cancer cells.

The study was funded by the Higher Education Authority of Ireland and the Cork Cancer Research Centre, and was published in the peer-reviewed British Journal of Cancer October 6 2009

These results have attracted much attention and although this data may help to increase our understanding of how polyphenols may contribute to anticancer mechanisms, whether turmeric in the diet has therapeutic effects in humans cannot be extrapolated from these studies.

Researchers, Susmita Bose, Herman and Brita Lindholm Endowed Chair Professor in the School of Mechanical and Materials Engineering, and graduate student Naboneta Sarkar, report on their work in the journal, ACS Applied Materials and Interfaces.

Bose said, ”Natural biomolecules derived from these plant-based products are inexpensive and a safer alternative to synthetic drugs. However, when taken orally as medicine, the compound can’t be absorbed well in the body. It is metabolised and eliminated too quickly.”

The researchers found that their system inhibited the growth of osteosarcoma cells by 96 percent after 11 days as compared to untreated samples. The system also promoted healthy bone cell growth.

“This study introduces a new era of integration, where modern technology is coupled with the safe and effective use of alternative medicine, which may provide a better tool for bone tissue engineering,” said Bose.

The researchers are continuing the unique area of research, studying the benefits of integrating other natural compounds in biomedical technology. The work was funded by the National Institutes of Health, Washington.

Should we be consuming turmeric to prevent cancer?

The bottom line is while there is no reason why turmeric can’t be enjoyed in everyday cuisine as part of a healthy, balanced diet. However, caution should be taken in thinking that turmeric is the magic bullet for cancer prevention or cancer treatment. No single food or ingredient is going to transform the nation’s cancer risk. Healthy dietary habits and other lifestyle decisions are likely to be far more important than turmeric on its own.